Among Us, a family tragedy in the suburbs

19/06/2012 - In Among Us Ilse and Peter are about to have their second child. To take care of their growing young family, they welcome Ewa, a young Polish au pair, into their home. Ewa is charming, but her extreme shyness makes communicating difficult. Inhibited by the language barrier, and especially scared to do or say something wrong, Ewa isolates herself each day a little more. She finds refuge with the couple’s little boy, and tries to become closer to Aga, another Polish au pair, but apart from their job they have absolutely nothing in common. Aga is brassy and direct, while Ewa is silent and discreet. One day, Ewa thinks that she has discovered a secret that could turn her adopted family and the whole community’s lives upside down. Confused, she does not know who to talk to. Her shyness could prove to be fatal for those to whom she is closest…

Although the film is set to quite a classic theme -- the Big Bad Wolf is after nice Little Red Riding Hood --, director Marc van Geffen doubly disorientates his audience: geographically (by setting his story in an extremely boring Dutch residential area), and narratively, by unravelling his tale in three sections, each corresponding to a character’s point of view. This triptych, even elliptical construction, means that information is only very slowly revealed to the audience. What we initially think is a sociological drama about culture shock slowly turns into a psychological thriller, in which Ewa’s detached despair contrasts with neat peri-urban landscapes and a soulless residential neighbourhood.

The first characters to be scrutinised are Peter and Ilse. They are at first confused, then gently exasperated by the young woman’s silence. But what if this apparently ideal couple was in fact hiding something? Especially as, despite their endless complaints that they cannot communicate with Ewa, their listening skills are not particularly great either…

The second character to be examined is Aga. But this second section, which clearly serves to generate empathy for a character that the director will then not hesitate to sacrifice, fails to achieve its objective and proves to be the story’s weak point. In this section, we don’t discover anything new, nothing that the first part hadn’t already implied or that the third part won’t later make clear, even if it does stress the impending danger.

Finally, the third section focuses on the story’s main character, Ewa. Although her extreme shyness remains somewhat of a mystery, this section does at least give reasons for her behaviour and progressive isolation.

This method may be effective, but it is a little too obvious to generate as much emotion as would normally be the case with such a threat to the community. But the story’s puzzle-like construction does maintain the suspense, and Ewa’s lack of confidence lets us imagine, until the end, that perhaps she is actually an untrustworthy narrator, that perhaps her terror stems from some form of incontrollable paranoia... We cannot help but think, right up until the end, that perhaps she is not quite the victim that the film makes her out to be.

Screened in the competition at the tenth Brussels Film Festival, Among Us, produced by Lemming Film, is the first part in a trilogy about the "tragedy of the happy family". The second instalment, In Your Name, took part in Cannes' last Atelier de la Cinéfondation, where it won the Arte Award.

Jackie on road to success

15/06/2012 - The third feature from Dutch director Antoinette Beumer, Jackie [trailer], has proved to be another hit with audiences.
After debuting with The Happy Housewife [trailer], based on a bestselling novel, and making the thriller Loft, a remake of the Belgian box-office success, Jackie is Beumer's third success in a row, as well as her first film based on an original screenplay.
Jackie was written by the screenwriting duo Karen van Holst Pellekaan and Marnie Blok, who also wrote the Happy Housewife adaptation. It’s an American-style road movie about two Dutch twin sisters (played by real-life siblings Carice and Jelka van Houten) who travel to the United States to help out their American surrogate mother, whom they’ve never met.
The titular Jackie (Oscar winner Holly Hunter) doesn’t seem to want their help initially. But with her broken leg and pierced eardrum (which make driving or flying impossible), she’s forced to rely on the two strangers to take her to a revalidation centre in New Mexico in her “rust bucket,” a camper that has seen better times.
A mix of comedy and drama, Jackie was released May 10 courtesy of Benelux Film Distributors. The Eyeworks Film & TV Drama NV has sold more tha 100,000 tickets in just over a month, with a box-office now take approaching €1.1m.
The only Dutch film currently in wide release, it is still playing on 96 screens after five weeks (for comparison, the most visited film of last week, Snow White and the Huntsman, was released on 100 screens in its first week).
http://cineuropa.org/2011/nw.aspx?t=newsdetail&l=en&did=222247

A Benelux Film Distributors release of an Eyeworks Film & TV Drama, Benelux Film Distributors presentation of an Eyeworks Film & TV Drama production, in association with Inspire Pictures, with the participation of RTL Entertainment. Produced by Hans de Weers, Reinout Oerlemans, Maarten Swart. Executive producer, Ronald van Wechem. Co-producer, Sim van Veen. Directed by Antoinette Beumer. Screenplay, Karen van Holst Pellekaan, Marnie Blok.
With: Carice van Houten, Jelka van Houten, Holly Hunter, Mary Woods, Howe Gelb, Chad E. Brown, Jeroen Spitzenberger, Paul Hoes, Jaap Spijkers. (Dutch, English dialogue)
Two Dutch twin sisters who are the very definition of "yin and yang" take their American surrogate mother on a femmes-only road trip in Antoinette Beumer's "Jackie." Affable perfs from Holly Hunter and Carice van Houten ensure an enjoyable ride, though the screenplay succeeds only very late in the game in using the genre's obligatory road stops as believable conduits for character change. Shot in photogenic New Mexico, and partly in English, this local B.O. hit could interest arthouse-lite distribs.
Dark-haired Sofie (Carice van Houten) and blonde Daan (Carice's real-life actress sister, Jelka) are twins who rarely make time for one another. An early dinner scene in which they visit their gay dads (Paul Hoes, Jaap Spijkers) makes the sisters' oil-and-water differences quite clear: Sofie, a magazine editor, is so busy with her career that she doesn't have time for a man, while Daan, who's married to the desperate-for-children Joost (Jeroen Spitzenberger), is her total opposite, looking to please everyone but herself.
When their surrogate mother, Jackie (Hunter), is admitted to a Stateside hospital, an unexpected call for help from the institution's staff means the daughters have the opportunity to finally meet the woman who gave birth to them in the '70s. The more family-oriented Daan jumps at the opportunity, though predictably, Sofie is less thrilled to meet her "womb donor."
The film's feeble excuse for a trip-a-trois in Jackie's rusty old camper is the fact that she can't fly (because of a pierced eardrum) and can't drive (her leg is in a cast), and needs to be taken to a New Mexico rehabilitation center. There's some perfunctory protest from the verbally feisty Sofie, but this is the kind of film where the characters' resistance to genre cliches is futile, marring the story's plausibility as well as its rhythm. While on the road, Internet and phone connections die on cue, snakes rattle, and rednecks of various levels of unpleasantness come a-calling while the siblings get to know each other and the initially not-very-communicative stranger who is their mother.
Written by scribes Karen van Holst Pellekaan and Marnie Blok (the writing duo behind Beumer's "The Happy Housewife," also with van Houten), the screenplay initially seems less an organic story than a reshuffling of past road-movie moments, with the music by Wiegel, Meirmans and Snitker helpfully suggesting whether a scene is meant to be humorous (guitar) or melancholy (piano). But as the trip approaches its final destination and a terrific twist -- which, if placed earlier, could have given the pic much more original material to explore -- "Jackie" finally relaxes into something credible and affecting.
This is in large part due to the actresses, with Carice van Houten clearly having fun with her character's nonstop barrage of colorful complaints and, not surprisingly, carrying on a convincing sisterly rapport with Jelka van Houten (two years younger in real life). The leather-faced Hunter, initially stuck in an aggressive and mostly mute role, also registers quite movingly by the closing reels.
Shooting on location in gorgeous New Mexico (thanks to tax-rebate advice from Beumer's own actress sister, Famke Janssen), Belgian d.p. Danny Elsen makes good use of wide shots and closeups for scenic reasons as well as the occasional punchline. The rest of the tech package is boho-chic.
Camera (color, widescreen), Danny Elsen; editor, Marc Bechtold; music, Wiegel, Meirmans, Snitker; production designers, Minka Mooren, Bryce Perrin; costume designers, Marian van Nieuwenhuijzen, Marion Boot, Barcie Waite; sound, Peter Flamman; line producers, Erwin Godschalk, Brent Morris. Reviewed at Cannes Film Festival (market), May 22, 2012. Running time: 102 MIN.
http://www.variety.com/review/VE1117947706?refcatid=2531 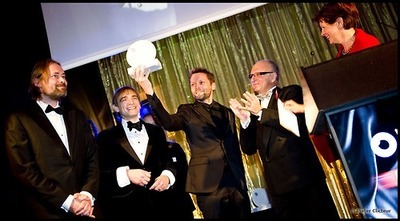